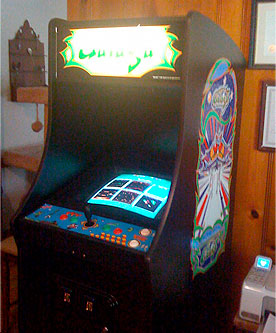 A few months ago I "invested" in a upright Galaga multicade. This is no costly refurb/restoration unit, but rather a customized new build from a great company called Arcadeshop Amusement. This place does two great things. First they will manufacturer/build you a new cabinet of your liking with all the parts professionally installed. This includes the display, JAMMA harness, coin door assembly, control panel, and all artwork. I chose a classic Galaga/Ms.Pacman/Midway cabinet with a 19" CRT display. My only deviation from the Galaga theme was a multicade control panel that had a 4-way joystick and two buttons for the left or right handed.

The second thing about this great company is that sell one of the coolest Multicade JAMMA PCBs I have seen. This board is programmable with a standard serial cable to run game ROM's in their approved list and that included such greats that I wanted like Galaga, Donkey Kong, Ms.Pacman, and Phoenix. For the record... I am not going after Billy Mitchell's record. I just wanted a nice low-tech diversion :)

So these games held me over for a time, but I really wanted to be a bit more flexible with the option to play some horizontal games. To that end, I invited my friend and fellow 757.rb'er Geoff Parsons over to help me rotate my CRT. Before we got to that jun part, I had to manufacture my own horizontal cross members to hold the display. Thankfully a trip to LOWES steel part section and a new hack saw yielded a very decent support system, see here. The icing on the cake after we remounted the CRT was to replace the 4-way joystick with a new 4/8-way super stick from HAPP Controls, a new 19-in-one JAMMA PCB from Lizard Lick, and a new monitor bezel for the horizontal display. Now with this PCB, I am enjoying games like Super Mario Bros, Gradius, and Defender. 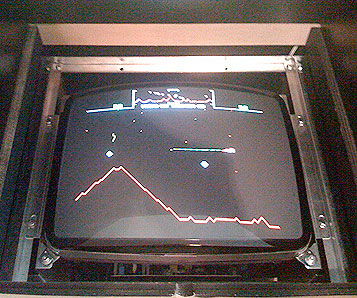 For those that may ask, why did I not go with some sort of MAME system. Sometimes options are good... but too many are distracting. I really like the idea of having as much as my multicade mimic the old arcade cabinet as possible, and hacking on another computer to do that was not in the cards. I love just slapping in a JAMMA board and having the set of games I like. Low-tech fun!